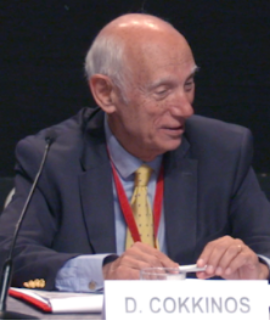 Dennis Cokkinos was born in Thessaloniki, Greece, on November 18, 1938. Dennis Cokkinos has been very active at the national and international levels of organized cardiology. He was elected President of the Hellenic Cardiological Society (1989–1990), Vice President of the European Society of Cardiology (1989– 1990), and member of the Executive Scientific Council of the same society. He is also a member, by invitation, of the British Cardiac Society and corresponding member of the French Cardiac Society, fellow of the American College of Cardiology, member of the American Heart Association (Hypertension Council), Chairman of the Working Group of the European Society of Cardiology on the Exercise Physiology, and numerous other international and Hellenic societies. Dennis has been a visiting professor in many European and U.S. medical schools. In the year 2000 he was appointed Clinical Professor of Cardiology at Emory University School of Medicine where he lectures a number of times during the academic year. Dennis has been a participant and often a member of the steering committee in several clinical trials under the auspices of the European Society of Cardiology.

Dennis’s clinical skills are very well known beyond the city of Athens, in fact, throughout Greece. High-ranking political figures, former prime ministers, and many personalities in the arts and sciences have sought his medical advice. Yet, over the years he generously donated his time to the least fortunate, the indigent patient. However, Dennis’s accomplishments extend beyond his contributions to medical literature, teaching, clinical research, and practice of cardiology. He is one star in the small constellation of cardiology stars of whom Greece can be proud. From the mid to late 1980s, a small, select group of cardiologists, Dennis among them, were responsible for Greek cardiology catching up with the rest of the western world.

These vintage cardiologists, all of whom trained at reputable cardiology centers around the world, returned to Greece and eventually were elevated to positions of leadership that enabled them to recruit junior associates, also trained in well-known centers abroad, who were eager to advance the frontiers of medicine. This new cadre of cardiologists, regardless of whether they were in university centers or institutions such as the Onassis Center, began to participate in international meetings, as well as to invite experts in cardiology from abroad to participate in Greek cardiology congresses. This interplay stimulated smallscale research activities that grew larger over the years